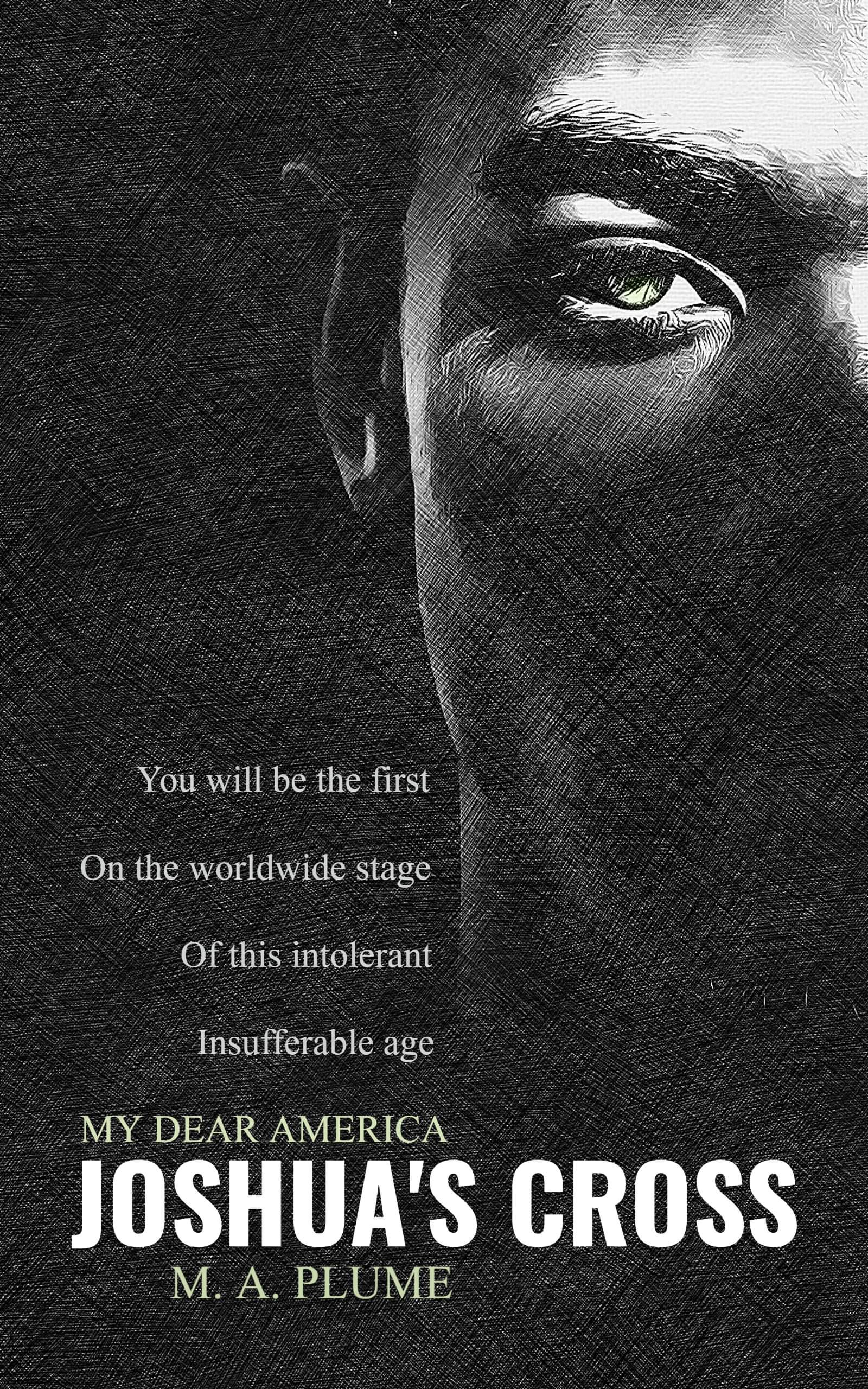 A web of tears

A litany of fears

A parody of nations

But you will be the first

On the worldwide stage

Of this intolerant, insufferable age

Joshua’s Cross is my pseudonym book. In it, I say I’m not going to divulge my name, but my pseudonym is burying it, making it invisible amongst the millions books on Amazon. And I didn’t write it to go unseen, so... I’m connecting my name to it so my readership can choose to read it or not. I say this last part because you may not want to read it, as it’s a very in your face book. It’s a social commentary about America, a view from the outside looking in. At the end of the book, it says that I may have gotten some things wrong, while other things right, though the main point is for the reader to start a debate by telling me in their reviews what they think of the story, of the topics. Am I right or wrong, or a bit of both? However, the book isn’t about me, I only have a point of view at the beginning and a very small one at the end. The book is about the characters: DeShawn, Joshua, Izzy, Nico, Jessica, Maggie, Harold, and so many more, representing different sectors of America. It’s also a plot driven book, one that shadows a very old story, the tale of Saint John the Baptist and Jesus, or more like a mirroring, DeShawn and Joshua making the story their own, setting it in contemporary times. Plus, Joshua tells his followers (many times) that he is not Jesus. He is an activist and a preacher.

So, give it a go, and don’t get put off by the seriousness of the beginning, or the satirical chapter. Promise me you’ll read at least four chapters (Amazon's free sample stops somewhere in chapter 5). And once you get to the end of Jessica’s chapter, if you don’t wish to continue, no worries.

It’s in your hands.

Also, remember, everyone has different opinions, so don’t get offended if you don’t like what you read. I’m not doing it to offend you, just tell me if you disagree. Debates are healthy, stewing on something isn’t.

Also, they're characters, doing things that would fit their personalities. So, also don’t assume I agree with all of them, because, first and foremost, it’s a story. I don’t always have control over my stories, they take me where they want to go. Writing for me is organic, so sometimes I write not knowing what’s going to happen next or how I’m going to portray a character. Other than, I write what fits them, not me.

Posted by Marita A. Hansen at 2:19 AM No comments:

I don't know whether this is to do with my ADHD, since I'm terrible at keeping secrets, unless it's very serious, or whether it's out of pure frustration since my pseudonym book is buried in anonymity, but I will be revealing the title once I work out how to write a warning for it. Because I WILL upset people with it, in particular Americans since it has a political element. BUT, I do encourage you to give me your feelings, to agree or disagree, telling me why it upsets you. The note at the end of the book even states this.

So, don't get put off by the first two to three chapters, thinking it's purely a criticism. It's not, it's a story, one I want you to read to the end, thinking about the content. To really think about what is said. But not to get so focused on the topic that you ignore the characters and their story. So, when I post the title and my pseudonym name, read to at least chapter 4, even if you're gritting your teeth, because I know some of you will be mad at me for painting one character a certain way. Just hear me out, IT'S A STORY, one that is meant to provoke intense feelings. One that is meant to spark debate, not to get you annoyed.

Promise me that you will read at least to the end of chapter four, which I believe is in the Amazon free sample, then if the story doesn't interest you, no worries, it isn't for you. But if it sweeps you up and carries you the rest of the way, leave me a review, telling me about what you think. And don't be shy to criticise it. It'll be the first time I won't flinch at criticism, because, as I said, I'm encouraging a debate.

Posted by Marita A. Hansen at 3:53 AM No comments:

A free update on Patreon - about Behind the Lives. I'm now reading Broken Lives to get info for Behind the Lives (in particular Behind the Bars, which is book 5), since it's set in the same world, with a lot of the same characters. Jasper returns! Leave me comments on my Patreon about what you want to read in regards to that series. https://www.patreon.com/posts/77739433

I'm currently re-reading Overwhelmed since I published it an eternity ago. It's
for writing the sequel, Hungover, so I don't get anything wrong. So far these
are my notes at 5%, although some are from memory (from other parts of the book) as well as what is written in Hungover, elaborating on the re-read. It's not much at the moment, but I'll add more to these notes as I continue the re-read.
Tom Hamlin
1) Bright blue-green eyes.
2) Maori tattoo on his right bicep (korus).
3) Doesn't look Maori, but is just
over a quarter. I don't believe it says this in the book, but I do remember this about him.
4) A body made on the construction site, not the gym, solid, muscular with a strong physique and six-pack.
5) Messy brown hair.
6) Has a sister called Anna.
Kelly Hamlin
1) Maiden name Botica (Croatian heritage).
2) Long black hair.
3) Hazel eyes that look brown most of the time, though is more green, in particular olive green, which becomes prominent when upset, tired or looked at
in a particular light. Some of this is noted in Hungover's first chapter, but probably is mentioned later in Overwhelmed (not at the point I'm up to).
4) Good at running in high-school, used to beat Tom's sister in all the races.
Remember, I'll add more notes to this post as I do the re-read, updating it.
Posted by Marita A. Hansen at 12:03 PM No comments:

Ugh!!! It's been decided, HUNGOVER (Blurred Lines #2) is the next novel I'll be working on, getting it ready for publication. Because of this, I'll be uploading chapter by chapter onto my Patreon page. Chapter 1 is on there now. Warning, it has an R18+ rating due to sexual content. Here's the link to the chapter on my Patreon: https://www.patreon.com/posts/hungover-chapter-75791863
Posted by Marita A. Hansen at 11:59 AM No comments:

I haven't written on here for so long. I haven't published a new book for a long time either, probably over two years now (not including translations). The reason is because I've been writing something very different. I got jaded with my writing, to the point where I started writing crap. So, I stepped back and decided to write about something with meaning, something that I've been wanting to do even before Behind the Hood was published. But since it's a story that's set in America, it required more research, especially since it focused on topics that need to be done well. And now it's finished! The pre-order went live on Amazon today, and will hopefully go live on NetGalley on Monday the 17th. I wish I could point you towards the novel, but due to it being done under a pseudonym (with valid reasons), I can't outright say it's mine. But I can at least give you some clues, giving you updates on when it's available to read. I also have a private group on Facebook with a few people who know about the book. I may increase that number, but we'll wait and see how things go.
Posted by Marita A. Hansen at 7:07 PM No comments:

Reviewers: Grab MY MASTERS' NIGHTMARE from NETGALLEY before it's too late

With only 1 week left to request, grab MY MASTERS' NIGHTMARE, Season 1, Episodes 1-5 from #NETGALLEY. Unlike with most of my other Netgalley uploads, I'm controlling the approvals this time, so your request will most likely be accepted. It's rare for me to turn down a request since I'm a pushover.

I didn't see it coming, didn't realize how different everything would be within the space of a month. I would fall in love with one man, I would kill another, and I would lose my body, my mind, my soul - my freedom to them. I was an operative, a strong woman, someone sent in to save others, but under these two men I became weak - or pretended to be. I didn't like being weak, it angered me. If I had free rein I could cut my masters in two. But I wasn't there for pride, I was there to free those women and to take down the two men who sold them as sex slaves.
Those men needed to be punished
And I would do it
No matter the cost
Or how much I lost
Because I am Rita Kovak
MY MASTERS' NIGHTMARE
Warning: This series is a soap opera, so has crazy plot twists. It also has M/F and M/M non-con and dub-con. It is very dark and violent. R18