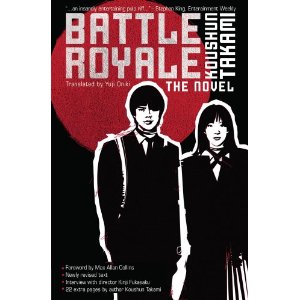 Adrenalin pumping, gun toting, emotional roller-coaster and an all out brilliant story. Now the gushing is over let gets to the rest of my review.

If you don't like reading about death and killing, this isn't the book for you, but if can handle extremely edgy content, then buy it now because you'll love the story. Yes, there were some bits where I cringed and thought, "Nooooo ... I like that character, bring him back, you big meanie!" but by and large I was completely wrapped up in the story.

Okay, a one line synopsis: A class of 42 students have to fight until there is only one left alive.

And this was the main reason why I held back a bit before buying this book, because I knew the majority of the characters were going to die and I didn't want to invest emotionally into them. By the way, The Hunger Games author must've read this book, because the ideas are too similar. Yes, she'd put a spin on her own story, but there are definite similarities, although Battle Royale is soooooo much better. And the reason why, besides the full on action and nail biting sequences,the characters were fantastic. I eventually came to the conclusion that it wasn't just about how the characters were going to leave this world, and in many of their cases biting the bullet, but it was also largely about getting to know these 15-year-olds and learning what made them unique and interesting. By the way, some of my favourites were Shinji, Shogo and Horoki. I also felt like protecting that poor boy who got shot trying to save that nasty girl's life. He was such a sweetheart and really put across how young these characters were.

And this brings me to the major theme of this story: TRUST. Some of the students trusted their classmates when they shouldn't have while others didn't trust when they needed to. This theme was all the way through the book and was a main reason behind why many of the characters died.

HEROES: Yes, there were a number of heroes in here, like Shuya, Shogo, Hiroki, Yukie, and some more.

VILLAINS: I HATED Mitsuko for what she did (the author gives us background information for why she became so horrible), Kazuo (the most stone-cold villain with literally no feelings due to an accident when he was a baby) and of course the despicable and deplorable Sakamochi.

Now, you've noticed all the names above are Japanese. Well, this is because this is a Japanese book that has been translated into English. I've read about some people complaining about the translation (luckily not too many). I personally didn't have a problem with it. Of course there were going to be some blips, but then again there are English books that have these too. Plus, I was so wrapped up in the story that I didn't care about a few not so smooth sentences. Remember, this also puts you in the mind-frame that you are reading a Japanese book, so just think of it as an accent.

By the way, Japanese names that start off with a Y must be incredibly popular, because there were a number of characters with Y names. Sometimes it was slightly hard to follow all the names, but the really distinctive characters, and the major ones that you were following the most, stuck out with no problems. As you can see I've mentioned some names above and I didn't need to look them up again, which is a sign of how much I got into this story, because foreign names are after all harder to remember. Anyway, if you have trouble remembering the names there is a list of all the students before the Introduction.

I'll stop here. Definitely a 5 star story, which is now classed as one of my all time favourite books (of which I have 4). I am now looking for the book's movie, which came out in 2000 (made in Japan).