Review of THE MARBURY LENS

It took a while to get into this book, and I wasn't completely submerged until about 60% of the way through. But, once I did get into it I was completely captivated and didn't want it to end. Though, I did love the ending and now want the sequel.

What made it harder to get in straight away? Don't get me wrong, I liked the first part of this book, and am notorious for getting distracted and putting reads down. So, for it to hold my attention and to get me to read it in less than a week is still a testament to a good story. And, I liked the concept very much. I also liked how the author weaved in the different aspects of the story, from the here and now to Marbury and then to Seth's story.

Jack, Connor and Seth were all fascinating characters (along with Griffin and Ben), Jack especially. I thought the trauma he went through was handled with care, which it should be for this age group (YA). It is definitely an edgy book that deals with tough issues, and all through it Jack grapples with his sanity.

Though, one of the things that I found hard at times to read was the repetitive element of Jack's thoughts, because it did irritate me. I know he was fighting with himself internally, at the same time deriding himself, but as a reader I had already heard it and didn't want to be reminded over and over again. That was probably the main reason why I didn't give the book a 5.

I also wasn't too fond of the way that Jack used third person at times, but I eventually came to the conclusion that maybe this was a device used to display the different sides of Jack's life: the here and now and in Marbury. Thus, I eventually went with this and stopped criticising it in my mind because in the end it did suit the story. For example, when Jack was in Marbury he still continued doing things in the here and now, but couldn't remember what he'd done when he got back and had to be reminded by photos, Conner or Nickie. Therefore, it made sense for him to talk about himself as though there were two of him, because in essence you could say there was.

There were a few other nitpicks I had, mainly stylistic preferences, but they are of little consequence, and all up I really did like the book. I originally went to buy another book by the author,In the Path of Falling Objects, but the shop didn't have any in stock so I got this one instead. I remember humming and harring over it, because they only had it in hardback, but I'm glad I decided to buy it, because I will be definitely buying more of this author's works. 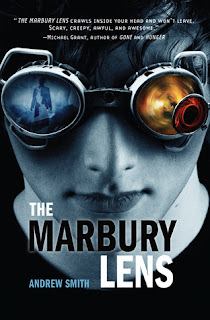 Link to the book on Amazon:
amazon.com
amazon.co.uk
Posted by Marita A. Hansen at 9:47 PM