Read from August 28 to October 14, 2012
I'm am totally conflicted on how to rate this book, because big chunks frustrated the hell out of me, while other areas I liked. Hence, the rating of 3, smack bang in the middle of scratch my head territory.

So, I'll go through the good and the bad, alternating between the two:

I don't tend to read books like this, in fact this might be my first New Adult Romance full stop. But I love paranormal romance, so I thought it was just a side step, something I'd enjoy. And I did sort of, but I think my main problem that held me back from really liking it (and it's a major one) was the character of Abby. She FRUSTRATED the hell out of me! I didn't like her at all, because I thought she was being mean to Travis a lot, and was quite selfish, leading him on constantly. Okay, it was fine for her to reject him at the beginning because of his rep, I get that, but when she finally got with him the drama after that was annoying. For ages it was like, she was SO great, he just had to chase her around everywhere (I didn't see why she was great, especially since she treated him badly), and when something went wrong it was always Travis's fault. Like the time she dumps him and then goes to his place to get something with America, and he walks in with a girl and she is mad at him! Like WTF? And America blows up at him and his cousin, again WTF? They had absolutely no empathy for the poor guy. He was dumped, he was moving on, but no, he had to abstain from sex because her royal highness hadn't given him permission to move on, but oh, she was allowed to do what she wanted. And another thing that really bugged me was when Travis beat up Chris with Abby's permission, because her "virtue" was denounced. And not with one punch, but quite a lot, yet when Travis punches another guy once and Abby gets the guy's blood on her she goes apeshit at him. Again, WTF? So, he isn't allowed to hit someone unless she gives him her royal decree? Another thing I couldn't stand about Abby, was that she was so judgmental of him (and others), going through a good section of the story feeling like Travis wasn't good enough for her, treating him like a whipping boy, and that he was just everything wrong, whereas she was the one who was wrong in my opinion. So, you can clearly see I didn't like her.

Okay, now to Travis. I liked and understood him better, but he did go over the top with his violence, like WAY over the top when he beat up Chris just for a verbal slight on Abby's "virtue". I have been punched before (karate) and have seen guys go down for a lot less punching than what Travis did to Chris, and I believe the type of punching that Travis was doing (or more like committing) could've caused serious damage, yet no one helped Chris, no one phoned the cops or the authorities, and that was it, once the beating had finished there were no more consequences and Chris's role in the story was done. It really seemed incredibly over the top, unrealistic and contrived. Travis was generally an over the top character, but as said before, I didn't mind him mostly, and Abby did drive him nuts. God only knew why he wanted her, probably because she kept telling him no and he wasn't used to that, since every girl on campus threw themselves at him.

Now to take a long breath, before the next lot................ Done. Now, I'll state some parts that I liked. The fight club scenes. I found those interesting, plus the drama with the creep pushing Abby against the wall, and the Vegas scenes. With the Vegas part in the story, that was one time that I could understand Abby's frustration with Travis, because he wouldn't listen, but still, she seemed to drop him way too easily and he didn't realise the seriousness of the situation. And the way America dropped Shepley too was way too easy. The women could be stone-cold bitches in this book. But I digress, overall America was fine, it was only one tiny section in the book that really annoyed me about her.

The plot, I mostly liked this. At times I lost interest, but then the author threw in some things that I didn't predict, like Vegas. My interest perked up greatly at these spikes in the plot, and I did enjoy those parts. Also, the fire scene was thrilling, and had me really worried for one of the minor characters, because of his connection to Travis. I'm glad with how the author portrayed this bit. And the ending, some say it's to sugary and wraps things up with a pretty bow, all nice and tidy, but actually, I liked that she did this, it gave the book a nice clean ending, and I did want a happy one. So, all sweet on that frontier. Additionally, I liked Travis's family scenes, giving the reader a bit of background on him, and I liked his determination to get Abby back (whipping boy! and again, why dude, why?), but it made for interesting drama.

Some people criticise the toxic relationship between Abby and Travis, but despite their character flaws, I didn't mind this part, because that's what the story was about. Plus, who wants to read a romance story where there isn't drama and it's all romance and flowers: I don't! So, no criticism on that.

On a minor note, the writing style did leave me a little jumpy, and scratching my head at times. Overall it was okay, fine, and easy to read, but occasionally it jumped from one place to another without a transitional phase. Like, Abby was in one place then suddenly she's outside, and I'm wondering, what the hell, I thought she was over there, so I go back and re-read the part and yup, she was over there. We really need to be told that she's actually got up and left. This happened more than a few times, but not always, so just be prepared that occasionally the characters will move like Usain Bolt between settings.

I'm going to round off now, and having looked over my review. Looks like I have a good amount of criticisms, but I wouldn't say to not read the book, because I did like parts, and I did finish the book, just was confused as to whether I liked it or not. Guess I'm sitting on the fence like with religion. My brain (and education) tells me it's illogical to believe, but my superstitions say you have to or your going to buuuuurn, lol. Just joking. But Beautiful Disaster was sort of like this, my brain was telling me this was something I really shouldn't like, and it had so many faults, mainly me not liking the main character, but the plot kept my interest, and stopped me from giving this book a lower mark. So, yeah, 3 is adequate for me.

Would I read Travis's point of view with walking Disaster. Maybe, it might be interesting, although the only problem (and a major one) is that I know the plot and that was the main part I liked. But then again, looking into a guy's brain can be fascinating and I might get to understand why he went overboard at times. I'll see, maybe if it's on special, like when I got Beautiful Disaster.

So, would I recommend this. Not sure. I think younger people will like it more than older readers, who have more of an understanding on life situations (though, not always true, depending on the person). For me, if I was younger I might not have been as critical, so it's purely a subjective thing. You either like it or you don't, and if you're like me, you're not sure :) 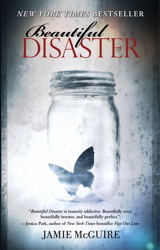 The AMAZON LINK to this book.
Posted by Marita A. Hansen at 5:16 PM