Today's Author Interview is with Chrystalla Thoma.
Marita: Hi Chrystalla. Can you tell us a few things about yourself?
Chrys: I am Greek Cypriot, raised on Greek mythology and mousaka. I am married to Carlos, who is Costa Rican, so I am famous for importing handsome men to Cyprus. When not reading or writing, I work as the European countries officer and Magazine editor for the Thalassaemia International Federation.
Marita: Tell me a little about your book.
Chrys: Rex Rising is a Young Adult Science Fiction novel about Elei, a young aircar driver in a world where parasites create new human races. He leads a peaceful life — until a mysterious attack on his boss sends him fleeing with a bullet in his side. Pursued for a secret he does not possess and with the fleet at his heels, he has but one thought: to stay alive. His pursuers aren’t inclined to sit down and talk, although that’s not the end of Elei’s troubles. The two powerful parasites inhabiting his body, at a balance until now, choose this moment to bring him down, leaving Elei with no choice but to trust in people he hardly knows in a mad race against time. It won’t be long before he realizes he must find out this deadly secret – a secret that might change the fate of his world and everything he has ever known – or die trying.
Marita: Where can people learn more about you and your work?
Chrys: You can follow my ramblings and news about my writing and stories here: http://chrystallathoma.wordpress.com/
You can find Rex Rising at the following distributors:
Amazon US
Amazon UK
Amazon DE
Smashwords 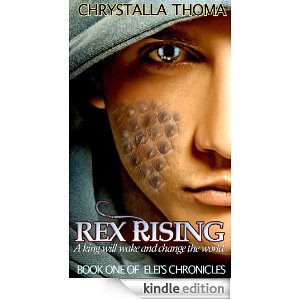 Wheezing, Elei took a faltering step before his knees gave way and the sidewalk rushed up to meet him.

Hands grabbed him just in time. Still blinking at the cracked cement, he was lifted from the armpits and dragged into the building. Disconnected images teased his vision — doors opening into squalid interiors, red-rimmed eyes curiously staring as they passed, and then he was pushed through a double door. Elei tripped on the step, but the guards’ momentum carried him inside into a dark lobby.

“Customer, Mr. Timmy,” announced one of them and Elei was deposited on a metal bench. The world blurred and pitched, and he gripped the edge of the bench.

“Gods in the deep!” Timmy stood behind a scratched counter — a well-fed young man with rounded cheeks and belly. A lit ama cigarette hung from his lips. He wore a white, button-down shirt that looked expensive, despite the yellow stains on the collar. Business was good. “Damned brigands, shooting my customers on my own doorstep. Very bad for the image.”

Elei looked down at his blood-drenched pants and didn’t bother to correct him. Let him think he’d just been shot. A moment of respite, of safety, that was all Elei wanted. His pulse beat in his head, in his throat, in his fingertips. If he felt safe, cronion would relax too and release its iron claws from inside his skull.

“Be sure to keep pressure on that wound.” Timmy sniffed. “Is it serious?”

Timmy brightened immediately. “Excellent. So, to business. Where to?”

“I need to go,” Elei had to stop and cough, “to Artemisia.” Coming through his bruised airways, his voice was a raucous whisper. He raised a hand to his throat and watched in fascination as his fingers shook like an old man’s. He clenched them hard.

“Listen.” Timmy puffed sweet smoke into Elei’s face. “A friend of mine has an aircar. For the right fee, she can take you anywhere you want. Do you have money?”

Elei coughed again. “Isn’t there a streetcar going that way?”

“No streetcars; the Gultur stopped the service. Rent the aircar or go walking.”

“Shit.” No wonder business was good.

Timmy took out his cigarette and flicked the ashes to the floor. “Aerica? That’s technically outside

Artemisia. It’s toward the old mines.”

“Hey, no problem, my friend can take you there.” Timmy smiled, his eyes narrowing. “It’s three hundred dils, though, up front. You need to book the entire aircar just for you, see.”

Elei stared, unblinking. Three hundred. A month’s salary. But he had to get there, and his body wasn’t likely to co-operate much longer. Screw it.

The problem was he wasn’t even sure he had that kind of money with him. He dug into his pocket, took out his last bills and scrounged for all the loose dils. Timmy reached over the counter to take them and then heaped them on the top like some sort of mythic treasure. His eyes glinted while his lips moved, calculating.

“This is two hundred seventy,” he said eventually, looking up.

Elei fished into his back pockets. “It’s all I have left,” he said stonily and waited, because there was nothing else he could pissing do.

“Tell you what.” Timmy leaned toward him, his voice low, and Elei could smell something rotten coming. “I could buy the Rasmus off you. It’s in good shape for such an antique gun. I’ll give you five hundred and you can ride for free. It’s a bargain. What do you say?”

Pelia had given him that gun. It was her gift. Elei’s right eye twitched and Timmy’s shape wavered. The colors changed, flaring into bright red and yellow, centered on the man’s heart. Trust cronion to suggest a direct and final solution. “No way.”

Timmy must have seen something in Elei’s expression because he backed off and sucked on his cigarette, his face going sour. “Fine, don’t get all worked up. I have another idea. Plenty of ideas, see. So, why don’t you give me the two hundred and seventy, and my friend can drive you to Ponds, not so far from Aerica. You can walk to Aerica, not four miles away, and she can take the heavenway from there. How about that?”

Elei clenched his teeth. “Just give me a discount. It’s not a big difference.” He wouldn’t beg, dammit.

“Sorry, my friend, but I can’t. The cost of dakron has skyrocketed and the taxes for this business…” Timmy tsked.

Elei bowed his head. Screw you. Four miles. He wondered if he’d make it. He took some deep breaths, willing his heart to slow. Too much adrenaline could kill you eventually, even if you didn’t bleed to death. “Fine.”
--

http://chrystallathoma.wordpress.com/
Posted by Marita A. Hansen at 8:19 PM