I won't tell you when I was born (as an upcoming birthday isn't making me happy), but I can tell you a little about my history as an artist.  I started painting and drawing from a very young age.  My first experiences with art, minus the crayons, was pencil drawing.  Originally I did a lot of portraits, but as I  got older I became more interested in creating unique drawings, such as below in my artwork "Canned." 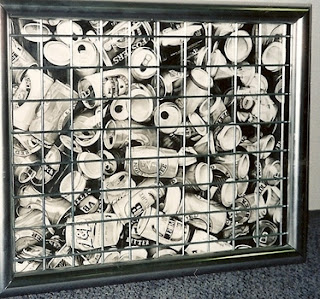 This is a pen and pencil drawing on illustration board.  Iron bars have been placed over the top of glass, and an aluminium frame (cut from an old fridge) has been used as the frame.  I remember when I went to show this work to a company. Halfway through our talks I mentioned something about pencils and the main guy looked at me stunned, then said he'd thought it was a photograph.
Once I left school, I was trained as a graphic designer at Auckland's Technical Institute, then worked in this field for a local newspaper.  But I eventually decided that graphic design wasn't for me and did a Bachelors, then an Honours degree at the University of Auckland.  I continued drawing, but started to concentrate more on painting as drawing was too easy for me, and I got sick of people thinking they were photos.


My photo-realistic style, mixed in with the beginnings of my compicturistic style,  can be seen in this oil painting of my daughter. 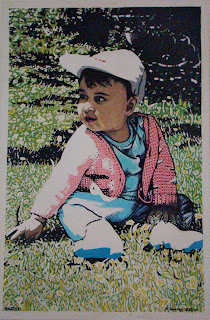 With my interest in photographs and photocopies, I eventually developed a style called 'compicturism'.  The name compicturism is a combination of the words ‘component' and ‘picture'. This is evident throughout my works where the smaller components of my pictures become more prevalent, seen in the many specks, dots, lines and other broken up elements of solid images. At times compicturism also allows areas of white to cross over the boundaries of different forms.  Compicturistic images are done through the process of placing thin layers of paint upon the canvas. The base colour is applied, followed by black, white and a number of other tonal variations (often in thin lines). A very fine triple zero brush is used to do the detail.


Here is a close-up of one of my compicturistic paintings: 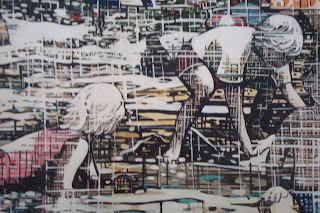 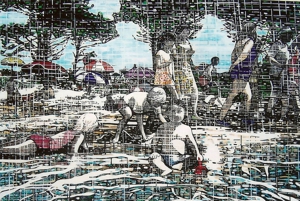 The March of Summer (Acrylic on Canvas)


These types of paintings are influenced by the diminished effects of photocopies and the tight detail involved in photographs. Everything is done in a very flat style. There is no texture involved, so as to further reflect the flatness of photographs and photocopies. My influence of photocopies can also be seen in the domination of lines within these images. Often when photocopiers run out of ink they leave lines running through the image on the paper. I have taken this further by accentuating these lines in full colour.  In some of my more recent paintings these lines start to run not only in horizontals and verticals, but also in diagonals. The use of lines is probably the most characteristic element of my style.


My work has won art awards and recognition from a number of notable people and groups.  When I was in New Zealand, I won two awards at the Art Auckland 2008 show: The Ngaire Stewart Award for Best Work in Show, and the Open Oil/Acrylic Category first prize.  The winning work "On Patrol" depicted a moment in time showing two New Zealand Military officers talking to Afghanistan Refugees.  In the background I depicted the local Afghanistan landscape in a detailed compicturistic style.  The Mayor of Auckland (at the time) Hon' John Banks, who had previously purchased my award winning "Aspects of Auckland," presented me with the main award.  Another major work completed in 2008 that gained a high amount of recognition was when the Dalmatian Cultural Society commissioned me to do a very large series of paintings detailing the past 150 years of Dalmatian history in New Zealand.  I'm often inspired by my Dalmatian (Croatian) heritage.  I have also painted other images detailing the Dalmatian culture in New Zealand (Dalmatian picnic scenes, kolo paintings and more).


In addition to my compicturistic style, I've also ventured into the world of children's illustration. This can be seen in my large drawing of the world, where each country has iconic images within their borders.  The sea instead has drawings of fish and boats relating to that area of the world. 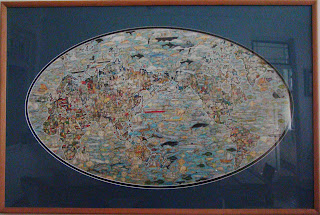 On a larger scale, I have painted a couple of rooms (one ceiling and a number of walls) with my brother David Matulovich (an established interior decorator and artist).  This was at Auckland's Starship Children's Hospital.  We did a space theme for one and a mixture for the other.

Next week I will talk about my history in writing.  And when I return to New Zealand I will photograph more of my artworks and popped them up here.
Posted by Marita A. Hansen at 10:11 PM