Signed Copies of Behind the Hood

If anyone wishes to buy a signed copy of "Behind the Hood" I am selling them at US$28 (postage included in this price). I will also do personalised messages (within reason). Payment can be made via Paypal (New Zealanders and Singaporeans have other options as well). To order copies you can email me at: marita.a.hansen@hotmail.com 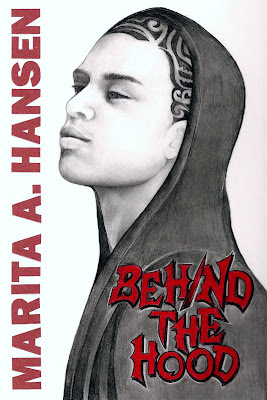 Here is a preview of my book:


A female voice yelled at Maia to shut up. Maia stopped screaming and opened her eyes. Her heart was racing. She tried to focus on what was in front of her. There was a pale green curtain partially pulled across, and a basin and cabinet to her left. Where was she and where had Tama gone? She closed her eyes and quickly reopened them, making sure that Tama wasn’t there. He’d been forcing himself onto her, his mouth and hands everywhere. But that hadn’t happened. It was just a dream.
She grimaced as she tried to sit up. Her back throbbed, and her stomach felt even worse. She pushed the covers off to see what was holding her down. Velcro straps lay across her mid-section. With a quick rip they were off, and she pushed up with an elbow. Pain hit her between the shoulder-blades, causing her to holler.
“Don’t you ever shut the fuck up?” a girl snapped.
Maia turned around slowly. Natural light shone through a window at the far end of the room. Hospital beds filled with female patients were placed in a row, and a god-awful smell of cleaning fluid was making her want to chunder. In the next bed, a girl no older than eighteen glared back. Tufts of blonde hair poked out from the top of her bandaged head, her face cut up and bruised.
Maia winced. Something was stuck to her back. She wanted to rip it off, but knew it would cause more pain.
“You don’t hafta be a bitch,” Maia snapped.
The girl pointed at her bandages. “I’m not about to thank you for making my head feel worse, am I? Duh.”
“Bitch.”
A wide grin spread across the girl’s face, replacing her scowl. “How’d ja know my name?”
Maia stared at her. What was the girl’s damage?
The girl continued, undisturbed by Maia’s sour expression. “My boyfriend calls me Bitch, but my name’s Stella. What’s yours?”
“Maia,” she replied, begrudgingly.
Stella pushed off her blankets, and swung two of the skinniest, lily-white legs Maia had ever seen out of bed.
“My man bashed me for cheating on him,” Stella said. “What happened to you?”
Careful not to aggravate her back, Maia slowly moved her feet out. “I...” She stopped as an image of Tama with his bloodied knife came to mind. God, he’d actually stabbed her. It just felt so unreal. Yeah, he threatened her before, but it had been sexual in nature, not an attempt on her life.
Tears began to form. Embarrassed, she wiped them away.
“It’s alright,” Stella said. “I cried too when I woke up. Did your man do it?”
My man? How old does she think I am?
“Sssshhh,” came from across the room.
“Shuddup, you old cow,” Stella hollered.
Maia glanced at the woman in the opposite bed. She looked about seventy, with the typical wrinkle and grey hair gig going on that old people seemed to be good at. She also had a nasty expression directed at them. Unlike Stella, who had nothing colourful surrounding her, the woman had vases filled with carnations and roses on her cabinets. Someone loves her, Maia thought.
Maia wondered where her own family was. Did they know she’d been attacked? No doubt her poor mum would be worried sick that she’d taken off. God, she was going to be in so much trouble.
Stella sneered at the old woman then turned back to Maia. “Well? What happened?”
“I got stabbed.”
“Shit … whatcha do for that to happen?”
“I didn’t do anything. I wuz attacked cos of my brother.”
“What did your brother do? And, who was the prick that stabbed ya?”
“None of your business.”
“Sheesh, you don’t hafta get shitty ‘bout it.”
Maia sighed. “Yeah, sorry. Just…” She looked down, her mind going to Mikey. She still couldn’t believe what Tama had done, but what hurt more was Mikey’s part in it.
“You alright, love?”
Maia shook her head.
“You want me to call a nurse?”
“No.” She didn’t want any medicine. Antibiotics always made her feel sick. She gently lowered herself onto her feet.
“You don’t look too good,” Stella said. “Nuthin’ some drugs won’t fix though. You sure you don’t want a nurse? It’s like room service here, but you get drugs as well as food.”
“No thanks.” Maia stopped, momentarily distracted by the girl’s badly scabbed arms.
Stella jumped out of bed. “Whatcha starin’ at?”
Maia jerked back. Oh God, she was definitely going to puke. She went to leave.
Stella blocked her path, her pixie-like face now aggressive. “Don’t you walk away from me, I wanna...” She stopped mid-sentence and swore loudly as Maia threw up on her.


Leila waited until Nike was out of sight before she headed back to her room. Jayden was lying on their bed with a pillow over his face. She sat next to him and brushed her fingers across his bare chest. “I’m so sorry.”
When he didn’t move she tried to pull the pillow off, but he gripped it tighter.
“C’mon, Jaybaby ... you know Nike and I ‘ave history, but you and me, we’re the present.” Yeah, she knew it was corny, but he needed it right now.
“Go away,” he said, his voice muffled.
She slipped her hand down the front of his pants hoping makeup sex would bring him round.
Jayden grabbed her hand and yanked it out. “Fuck off!”
Leila slipped her hand down again. Jayden never stayed mad at her for long once she got him going. He always forgave her. Yeah, he called her bitch a lot, and lately ho, but he never meant anything by it. He was a big softie when she put on the charms.
She leaned over and nuzzled his ear. “I didn’t mean to say that to Nike. He just upsets me so much. But I love you more. I really do.”
Jayden yanked her hand out and sat up so fast she fell off the bed.
Leila landed on her butt. “Whatcha do that for?”
She looked up and froze, shocked by his expression. She’d never seen him look so angry. His usually soft face was hard, his big lips pulled back into a sneer. This wasn’t her sweet Jaybaby and it frightened the hell out of her.
Jayden pushed up out of bed. Leila got to her feet and quickly backed up into the wall. He placed his hands either side of her.
“Jaybaby, you’re scaring me.”
He glanced at her chest then her face, with a look that she could only describe as violent. He’d only ever been gentle with her. He wouldn’t hurt her ... would he?
Jayden’s gaze dropped to her chest again. He went to say something, but stopped, his harsh expression now uncertain.
She slipped off her nightie, wrapped her arms around his waist, and pressed into him.
“Get offa me!” He pushed her away and backhanded her.
She felt his ring slice her top lip, and tasted blood as he hit her again. A punch landed across her jaw, knocking her to the floor. She would have screamed, but nothing came out. This wasn’t real, Jayden wouldn’t hurt her. He was romantic, bought her roses on Valentine’s Day, remembered her birthday and took her to sappy movies. This wasn’t real!
He stood over her, his face furious. “You humiliated me,” he yelled. “Why didja even marry me?”
She couldn’t tell him it was because of Nike, he’d go even more ballistic.
“Answer me!” he yelled.
She jerked back. “Cos I love you.”
“Bullshit! You’re a fuckin’ liar.” He covered his face. “I also know ya fucked Tama when I wuz at work.”
Leila felt sick. She pulled herself up. Her legs were shaking so bad she was surprised she could stand. She grabbed onto the window ledge. The curtains were closed. Jayden could do anything and no one would see. In a panic she yanked one side across and opened the window. Across the road, in front of a row of brick flats, the Sprat boy was juggling a soccer ball. He didn’t notice her, his concentration fixed on what he was doing. Leila wanted to scream out to him, but couldn’t.
Jayden pushed her onto the bed and yanked the curtains shut. He turned and glared at her. “Why didja hafta do it with Tama? He’s like a brother to me.”
“I didn’t ... How didja ... Oh God, I’m so sorry.” She stood up and edged towards the door. “I’m really  sorry—”
A punch struck her jaw, sending her reeling into the cabinet. She knocked over the photo of her mother and the phone as she tried to stay upright, then slid down the side and onto the floor.
Jayden pushed her onto her back. “Aren’t I good enough for you?” he asked.
“No, you’re g-g-good.”
His face darkened. “That’s not what I heard. Mikey blabbed. Whenever the kid saw me he laughed. I wanted to know why, but he wouldn’t talk until I got him high. Tama told him what ya said ‘bout my dick. Thin like a finger, too small to feel.” Jayden jammed a finger between her legs, making her squeal. He sneered. “Ya felt that, didn’t cha?”
Leila started to shake. “Please stop, please.”
“No! I’ve known for a week now and like a retard I did nuthin’.”
Stunned, Leila stared at him, realising that was when he’d started calling her a ho. “Why didn’t cha tell me sooner?” she sobbed.
“Tama wuzn’t gonna steal ya. He may fuck ya, but he’s still my mate...”
Leila didn’t see his logic.
“...but Nike is different. If he said yes, you’d leave me in a second.”
“But I never slept with Nike when I wuz with you.”
“Not from want of tryin’.”
Tears ran down her face. “Please stop, Jayden, please...”
He removed his hand and stood up. “Who’s the ugly one now?”
Oh God, he looked like he was going to kill her.
He growled and kicked her stomach.
Leila finally screamed.

Behind the Hood is also available on Kindle: amazon.com  amazon.co.uk
Posted by Marita A. Hansen at 12:23 AM No comments: