Music Countdown For Behind the Lens

Since I've done a music countdown for my other books, I thought I'd do one for Behind the Lens. Behind the Lens is the 3rd book in the Behind the Lives series. It picks up where Behind the Tears left off. Just a warning, this book is considerably racier than the other books, with erotica as the main genre. I didn't intend it to be, but the book took on a life of its own. Anyway, the music chosen relates to my characters' personalities, situations, and in one or two cases a character sings a song. So, amp up the volume and have a listen.

BEHIND THE LENS' MUSIC COUNTDOWN

Always On My Mind
Tiki Taane


Ash sings this song while making his son a playhouse, because his stepfather ruined the last one by stuffing a dead body in it. Plus, Ash has arm and neck tattoos.

I thought it would be a good opportunity to put up some KPOP (Korean pop music) for Jade, since I got rather attached to this type of music while living in Singapore. Plus, Jade's Korean, although he was raised in America. He's also a music producer and when I think of him, I imagine him to look like Lee Joon, the one with the black hair and white top who's the first one to start singing in Korean near the beginning of the video. Thunder is the one who speaks in English at the start, then Lee Joon takes over.

Brucia La Terra
From the Movie The Godfather: Part III

What a character said about Nike in Behind the Lens:

“One of the other guards said they’re grooming him to be a hitman, and I believe it. That guy scares the hell out of me. He looks at people like he’s assessing whether they should live or die.”

Both Beth and Corey also think Nike looks like he's with the mafia, Beth in particular. Because of this, I thought I'd pop up a Godfather song, of which also fits his tortured soul. By the way, Nike has changed dramatically since you last read about him in Behind the Hood. He's grown from a boy into a vengeful man, and although he's only a side character in Behind the Lens, his role is still very significant.

The above version is my first pick, but in some countries it won't allow you to play the video, so, if it causes you problems, check out the remix below or this link HOOD LIKE ME, which will take you to the above video on Youtube, which was filmed in South Auckland, and suits Tama better.

Anyway, I chose this song because Tama is the ultimate hood, the gang leader who does whatever the hell he likes. He swears, smokes, drinks, fucks, and gives the finger to the world.

Like the words in this song, Sledge literally runs away from Corey. He doesn't want people knowing about his relationship with Corey, but the second he leaves he wants him back.

I've listened to this song over and over again while in the car. I basically consider it Behind the Lens' theme song, because of the Russian roulette scenes at the party, which are explosive. And since I've put it under Beth's name, she's obviously one of the people involved.

Kara is Dante's vicious ex, who wants him back and will do anything to get him. Beth better watch out, because she will go down fighting. She's of Croatian descent but from Bosnia, someone who's been affected by the war in her home country. Which is why I've chosen a Croatian song with a tough blonde.

In Kara's words it's: "Time to kill or be killed."

What About Love
Austin Mahone

I chose this song because of the beanies. Corey never lets anyone see him without one on. But Corey is a lot grungier in his dress sense. He wouldn't be caught dead wearing preppy clothes, hoodies and baggy jeans more his taste. And, instead of chasing the girl in the video, Corey would be chasing Sledge on his crutches.

Jade saw Dante sing this song in a video. It's a song Dante holds dearly, as it was sung by his grandfather at his mother's funeral.

And since Dante is the star of the show in this book, he's going to get two songs, the second relating very much to what he's like. If there was a song called Sex on Two Legs, it would be his, but the one below is even better.

Sex On Fire
Kings of Leon

If you wish to purchase a copy of Behind the Lens, the different links to AMAZON are below: 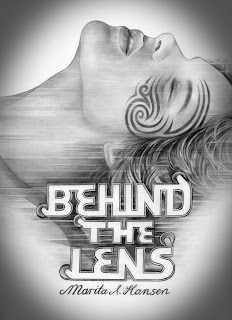 Posted by Marita A. Hansen at 1:47 PM No comments: