Behind the Hood AND Graffiti Heaven

I have two published books,  one for readers 18 years and older called Behind the Hood and an edgy YA book called Graffiti Heaven. They are both about the rougher side of life in New Zealand, and are set in South Auckland (based around Clendon Park / Manurewa). I remember when I first put part of Behind the Hood up on Youwriteon and Authonomy (writers websites) people were genuinely shocked and told me that they had no idea New Zealand had these types of places, because it is often portrayed as clean, green and safe.  But, from Auckland to New York, London to Melbourne, we all have our problematic areas.


Another thing that people asked about was why I chose to write about the Maori people in Behind the Hood.

Originally this took me by surprise, and still has me tongue-tied at times, because I never really considered that I was specifically writing about one culture. Instead, it was the settings that influenced my story. This was because at first I had intended on writing a fantasy piece set in Singapore, but changed it because it wasn’t working. And when I placed it in one of my old neighbourhoods in South Auckland (Clendon Park, which I call Claydon in the book), the story suddenly took off and morphed into realism.
However, the settings do not alter the fact that my novel is very much character driven, which is another reason why I don’t believe my book is just about the Maori. Instead it’s about New Zealanders from areas like Clendon. Although there are a number of Maori characters, there are also others that aren't, like Rory and Stella, as well as her bunch of friends from West Auckland. Also, Jess and Saul are Samoan, while the Connor family are Irish and Cook Island Maori (which is different from New Zealand Maori). Plus, the characters that have Maori in them also have other nationalities, such as seen in Dante's tattoos. He has both Slavic writing and Maori designs, which reflects his Croatian and Maori heritage. I added this in because there are both Maori and Croatians in my family, which is quite common in the upper part of the North Island. It's a place where a lot of Croatians (from the Dalmatian coast) came to dig gum. And because of how well the Dalis (a nickname) got on with the Maori there were intermarriages. So, again, this isn't a Maori story, this is a New Zealand story.

I have also had people mention Once Were Warriors. Although I touch on similar topics, my book isn't the same and is written very differently. Not only are the styles nothing alike, but Once Were Warriors focuses on one family, and was set in Rotorua (while the movie was set in Otara). In contrast, my book encompasses a number of families. Once Were Warriors was also from a different generation. Although it was published and made into a movie in the 90s, the mention of Jake’s slave ancestry suggests that it was set further back.

But, as I said, my novel does touch on similar topics as Alan Duff's.  Domestic violence, suicide, gangs, abuse, crime, and so forth are all portrayed, which shows that these problems have spanned a number of generations.

In Graffiti Heaven I wrote about the same place as well as extending it to the wider community of Wera (based on Manurewa). This book is set in the year 2000, ten years before Behind the Hood.  Although it follows some of the same characters from Behind the Hood, namely Ash Rata, I went for something different, making it not as harsh. Yes, it still has harsh topics, but it isn't as in your face as Behind the Hood is, plus it has humour. And, this time the ethnicity of a lot of the characters are noticeable, which was intentional. Two of the main characters are Tongan (Tiana and Levi), one is Maori/Croatian (Ash) and the other is a run of the mill Kiwi with a mix of nationalities (Jenna), while there are more with Samoan, Irish, Japanese, Italian and Welsh ancestry - a real cultural melting pot.

In Graffiti Heaven I also cut down on the viewpoints, and unlike Behind the Hood, chose not to get inside the head of the bad guy (not something that I wanted to do, due to the horrible nature of this character). Yes, in a way you could call Jenna (the bully) the bad guy, but she wasn't a harsh character and is not the true villain of the story. Instead, as long as you haven't read Behind the Hood, you will not know who the villain is until they strike.

Graffiti Heaven also doesn't solely rely on action. Instead, it covers many topics: Teen life in general, first times, sex, dating, peer pressure, bullying, jealousy, step-families, dysfunctional families, kids dealing with their parents splitting, unwanted pregnancy as well as homophobia and sexual abuse. But, because the above topics are controversial, Graffiti Heaven has still raised some eyebrows, even more so with the first chapter going straight into a certain type of sex scene. HOWEVER ... this scene sets up the book and a lot of the tension that follows, so in my defense it was needed to propel the story forward. Plus, it was inspired by someone's experience (not mine!) 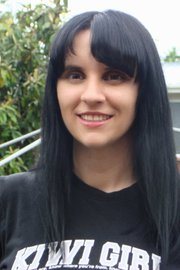 Posted by Marita A. Hansen at 5:35 PM No comments: