Rating: 1 1/2 Stars.Please note: This is just my opinion and I'm sure many will disagree with it, so I'm sorry if it upsets anyone, that's not my intention.__________________________I shouldn't have read this book, since the first one was only ho hum for me, but because I gave Beautiful Disaster 3 stars I thought maybe Walking Disaster might be an improvement. Unfortunately, the parts that I didn't like in Beautiful Disaster were doubled in this book, and it was mostly due to Abby, who irritated the living snot out of me. Though, I didn't mind Travis too much in Beautiful Disaster, and because he was psychologically not right I thought his viewpoint might be interesting to read, hence why I read Walking Disaster.BUT I WAS WRONG, because it was a total disaster. It started off good, making me actually like Travis, and I still liked him by the end of the book, but I didn't respect him, because I cannot fathom why he loved Abby, because I HATED HER. I disliked her in the first book, but seeing Travis's point of view made me utterly and absolutely loathe her in this one, and she is now at the top of my most hated characters list, with her friend America coming in second. God, that bit when America went off at Travis and her boyfriend made me so infuriated, hence the pictures below. I REALLY, REALLY hated America after that. She was a blind, hypocritical creep, totally full of herself and horrible with the way she treated her boyfriend and Travis. Those woman should be linked with Kathy Bates with how they treat men. THEY WERE HORRIBLE! Which leads me back to Travis, and why I didn't respect him, because he was a pussy to let these two run all over him. No respectful man should allow themselves to be treated so badly by stone-cold bitches without any feelings. *Taking in a big breathe now, calm down* These observations have nothing to do with the writer's ability, she just created characters that I hated (Abby and her HORRIBLE friend).However, where the writer did fall flat was the structure of the book, which was so loose and all over the place. You really can't read this book without having first read Beautiful Disaster, because there were so many jumps between scenes it left me scratching my head and trying to remember from the last book where it was up to. Usually authors fill in the blanks, do connections so readers can remember what went down in the last book, by including one line or a few words to clue us in, but it wasn't so here, there were giant chunks missing out. I realise the author didn't want to rehash what was already said in the previous book, but still, a line here or a line there would've pulled the structure together and made it easier for me to read.Another thing I didn't like was that I didn't think Travis's personality was hashed out fully. We were only given the death of his mother as to why he acted wild, and of course, his rough and tumble, although good, relationship with his brothers. These things weren't enough to explain a lot of the things he did. Well, not for me anyway. I would have liked to see his character more fleshed out.Also, I wasn't fond of that happily ever after, so bloody unrealistic ending. It just came out of the blue, and to me was ridiculous. Others might like it, and may think it was cool, but I didn't, I thought it was silly.However, all said and done, the readers who love the first book will probably love this one, but for me, it fell flat, so I won't be reading anymore books from this author. It's just not my taste. Sorry._________________________________________________________May the 9th and I can't seem to finish this, but I will, I promise, it's just making me feel like someone is doing this to me: I want Abby's friend to meet this guy as well as the one below, and to bring Abby with her:

Currently @ 84%I hate Abby's friend America so much right now I want to introduce her to this guy. Posted by Marita A. Hansen at 7:45 PM No comments:

...I decided to write one on a book that I will eventually publish. The book is a YA fantasy, and the first book I wrote. But I want to rewrite it, making it a lot better. Anyway, I was mucking around with its theme and wrote the poem below, which has the same title as the book: "Stella Maris". I'm not a poet, like my mum, so it's not very good, but my daughter was sweet enough to say she liked it, so I thought I'd pop it up on here for you to shake your head at and tell me to keep my day job.

P.S. Stella Maris literally means Star of the Sea (a school I went to), plus it also represents the Virgin Mary.


STELLA MARIS (the Star of the Sea)

When a loved one dies,
Stars don’t shoot across the skies,
They rain tears down upon our lives,
Filling the empty crevices of our soul,

Becoming an ocean of despair
Lapping at the edges of our fear,
While the wind wails over our loss,
Wrapping its cold arms around our flesh,

The star falls to the earth,
Dragged down by her own tears,
Mourning what we have lost,
Our dear Stella Maris, the Star of the Sea.
Posted by Marita A. Hansen at 4:32 AM No comments:

Dante mentions this song in Behind the Lens (due for release in June). It was sung by his dida (grandfather) at the funeral of Dante's mother.

The English Translation for Plavi Orkestar's song is below:


THE SAVA IS FLOWLY QUIETLY

It appears to me to be about a father letting his little girl go, because she is becoming a woman, changing, but in the case of singing it at a funeral it would mean something totally different to Dante's grandfather, because he wouldn't be seeing his daughter again, and is letting her go forever.
Posted by Marita A. Hansen at 5:50 PM 3 comments:

I might be humiliating myself in the near future by publishing my teenage diaries from 1988, 1989, 1990 and 1991. I read extracts to my daughter tonight and she was laughing so hard, and I was going what the hell? I was a complete and utter embarrassing git. But my daughter said my teenage thoughts were adorable and that they were the funniest thing out (they weren't meant to be!) It was because I would rant about something, saying I would do a whole lot of stuff, writing some really embarrassing things, then the next day I'd write: Forget what I wrote yesterday I was just being paranoid. My daughter couldn't stop laughing because I would go through whole plans to do something really stupid then discount it the next day. I asked my daughter whether teenage girls would want to read my diaries (embarrassing thoughts about boys, angst about family dramas, life, work...all real stuff, nothing edited) and she said yes, and my daughter is brutally honest, her laughing over my teenage thoughts enough to make me consider doing it now.

Though, I'm going to test it out on a writing site first under a pseudo name, because it REALLY is embarrassing reading about how wide-eyed and clueless I was back then and putting my private thoughts out there for everyone to see. But I have been thinking about this for a while now, so it is very likely now.
Posted by Marita A. Hansen at 4:51 AM 2 comments:

A Chance to Win a Copy of BEHIND THE TEARS

I'm doing a number of promotions leading up to the release of Behind the Lens, which is the third book in the Behind the Lives series (due out in June). Here, I'm giving away a paperback copy of Behind the Tears (book 2). To enter for a chance to win, click on the link below and follow the instructions on the Goodreads' website. If you have any queries leave me a message and I'll be happy to help.

ENTER THE GIVEAWAY THROUGH THIS LINK 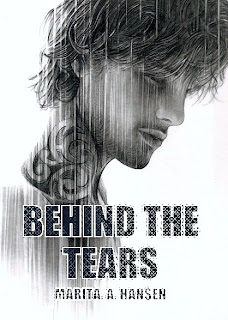 To trust is to get hurt, to be loved could end in death.
Everyone sees Ash as the toughest of the Rata brothers, the tall, tattooed man who is untouchable. But not many know of his past, of a tormented youth, which almost saw him take his own life. For ten years he's lived with the nightmares of his stepfather raping him, and how it destroyed his family. Further tormented by his first love leaving him, he tries to move forward with his new partner Beth, but is unable to open up to her, his past continuing to eat away at his soul.
Beth knows Ash is keeping her in the dark, and every word he doesn't say, every secret he keeps, pushes her further into his brother's arms, someone who doesn't understand boundaries, a trait that has given Dante a wild reputation: the man every woman wants to bed. Hedonistic and uncontrollable, Dante desires Beth to the point of madness, his bipolar condition worsening with the stress of his hidden desires. He wants to control her, to take her, but he is deeply reliant on Ash, and like his brother, he hides his true nature. On the outside he shows a confident swagger that gets him the attention of both sexes, but on the inside all he wants is one woman who sees him as more than a sexual object.
Sledge, the youngest of the three Rata brothers, finds himself in a different situation, dealing with the affections of his best friend: Beth's brother Corey. Diagnosed with cancer, Corey wants Sledge more than life itself, even though he believes Sledge is homophobic and would find him disgusting if he confessed his love. But when another man shows interest in Corey, Sledge's jealousy eats away at him, and makes him reassess his sexuality, and whether he could be more than a friend to Corey - whether he could be his lover.
As the Rata family's love life is thrown into tangles, the brothers' stepfather escapes from prison with one thing on his mind: To get Ash once again. Someone he will kill for - and has killed for.
(R18)

Posted by Marita A. Hansen at 3:54 AM No comments: